healing and human rights blog, The Center for Victims of Torture

We have a quick announcement. Healing & Human Rights will soon move to our Web site. In the coming days, please visit www.cvt.org for future posts and updates on our work.

As always, we really appreciate your interest in our blog and continue to look forward to your comments!

Each year, thousands of Eritreans flee to refugee camps in northern Ethiopia to escape forced military inscription, persecution, and torture. The UN High Commissioner for Refugees (UNHCR) recently announced that Ethiopia is now the largest refugee-hosting country in Africa. According to UNHCR, Ethiopia is host to 629,718 refugees. The largest refugee population is South Sudanese (247,000), followed by Somalis (245,000), and Eritreans (99,000). UNHCR says that, over the past seven months, almost 15,000 Eritreans arrived in Ethiopia.

As the Eritrean government targets the families of young men who flee the country to avoid forced conscription, more women and children have also fled Eritrea seeking refuge in Ethiopia.

Upon reaching safety, however, many continue to experience the severe physical and psychological effects of their traumatic experiences. Our healing project in Ethiopia was started in 2013 to address their complex needs. 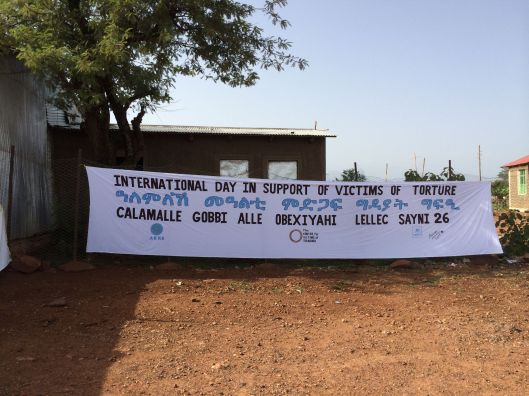 Once Eritrean refugees arrive at the camps, many hope for resettlement to third countries—a prospect that is difficult for most. Given that those refugees who cannot be resettled are also unable to return to their homes in Eritrea, some choose to make the dangerous and illegal journey through Sudan and Egypt in hope of reaching Israel or elsewhere to find work. Along the way, they face the risk of torture, detention and imprisonment at the hands of security forces and human traffickers.

Last November in The Huffington Post, CVT Executive Director Curt Goering called upon the international community to do more to provide for the basic human needs of Eritrean refugees.

END_OF_DOCUMENT_TOKEN_TO_BE_REPLACED

The UN High Commissioner for Refugees (UNHCR) recently issued a report on the plight of Syrian refugee women. Woman Alone: The Fight for Survival by Syria’s Refugee Women shows that more than 145,000 Syrian refugee families in Egypt, Lebanon, Iraq, and Jordan – one in four of all households – are headed solely by women. According to UNHCR, the report uncovers that “Many [women] live under the threat of violence or exploitation, and their children face mounting trauma and distress.”

The information contained in the report is based on early 2014 interviews and the personal testimony of 135 women who head households, as well as UNHCR data from ProGres, which is the standardized system for refugee registration.

Among the serious issues covered in the report, one area of particular concern to CVT is the level and impact of sexual violence against many Syrian women. From the report:

Women affected by the conflict in Syria continue to be easy targets of sexual violence and harassment in the countries of asylum, in addition to the plight of leaving your own country and being dispossessed of everything.

Sexual violence is a common form of torture. In our own work, a large number of survivors we’ve seen at our St. Paul Healing Center have reported sexual torture. We also saw the devastating impact of sexual torture at our former project in the Democratic Republic of the Congo. Our staff in Jordan is now hearing from women who describe in detail torture, imprisonment, rape, or other forms of sexual and gender based violence inside Syria. They say that rape is widely used against girls when soldiers break into the house, and they are often raped in front of their fathers and other family members.

Sexual torture is so widespread because it is an effective tool of suppression to terrorize and intimidate entire communities. As a military and political weapon, it subjugates and humiliates people of both genders.

What we know from our experience working with survivors of sexual torture is that rape will have a long-term impact on the individual, family, and community. Women may face difficulty returning home, especially after the birth of any children. The survivors may also face critical physical injuries and exposure to serious infections.

While we know the effects of sexual torture are long-lasting and difficult to resolve, we also know that healing is possible. With skilled and culturally appropriate care, survivors can and do recover. As a result, families reconnect and communities can get better after sexual assault.

If you would like to learn more about how we help heal and restore dignity to survivors of sexual torture, a previous issue of our Storycloth newsletter highlights this important work. You can read the article here.

In Liberia, a brutal civil war killed thousands and forced millions to flee. More than a million Liberians – about a third of the population – were forced from their homes by the 14-year war. Today, Liberians continue to face challenges as the country works toward rebuilding and recovering after the war. Most recently, Liberia is among three West African countries facing an outbreak of the Ebola virus disease.

CVT has long been involved in the plight of Liberians and commends the Senators for raising this important issue. More than 30,000 Liberians live in Minnesota and an estimated 1,000 live under DED status. Two suburban Minnesota communities – Brooklyn Park and Brooklyn Center – are home to many Liberian families who would be severely impacted by mass deportations if the extension is not granted by September 30. Liberians living in Minnesota and other states have raised families in the United States and have become an integral part of the fabric of the communities in which they live.

CVT currently extends rehabilitative care to Liberian torture survivors at our St. Paul Healing Center and knows that the specter of deportation can make any survivor anxious about their futures. This uncertainty is a serious impediment to their recovery.

CVT remains deeply concerned about the well-being of thousands of Liberians nationwide who are at risk of being deported and hopes President Obama will extend the Deferred Enforced Departure date as soon as possible.

Curt Goering is the Executive Director of CVT. In 2009 and 2010, he served as Head of the Gaza office for the UN High Commissioner for Human Rights. While previously working at Amnesty International, he also investigated the impact of rockets fired from Gaza on communities in southern Israel. Here, Curt reflects on his experience in light of the recent ongoing violence and the heavy psychological toll the conflict is inflicting on children from both sides.

The latest round of fighting in the Gaza Strip brings back vivid reminders of the devastating impact of the war on the civilian population, especially among children, who are the majority of people there.  I headed the Office of the UN High Commissioner for Human Rights in Gaza following the 2008/2009 conflict which, like this one, resulted in massive human rights violations and evidence of possible war crimes.

In the aftermath of the war, the evidence of trauma was everywhere: large numbers of children wetting their beds; children afraid to leave the sides of their parents; children afraid to try to sleep alone; children with recurrent nightmares; and children paralyzed with fear when hearing a sudden, unexpected sound such as the slamming of a door.

The frequent explosions from bombing raids, the subsequent shaking of buildings, the daily shelling from naval boats at sea, and the drones in the air, all contributed further to the sense of insecurity and vulnerability.  Children sensed their parents were unable to provide safety which contributed to a range of behavioral problems and erosion of parental authority.

During the current violence, it is abundantly clear that the numbers of dead and injured Palestinian children are very high, and continue to rise as virtually an entire population is unprotected and vulnerable, unable to leave Gaza because the borders are sealed and unable to even flee the bombing and shelling  because there is no safe place to go.

In Israel, the lives of children and adults are at risk from rocket fire from Gaza. The attacks are indiscriminate and symptoms of trauma and psychological scars are evident among the civilian population.

According to the UN High Commissioner for Human Rights, “… there seems to be a strong possibility that international humanitarian law has been violated [by both sides], in a manner that could amount to war crimes.”